In the month of March the impressive Elephant Festival of Jaipur, the capital of Rajasthan, is celebrated. Each year, this festival is celebrated coinciding with the Holi , the festival of colors. 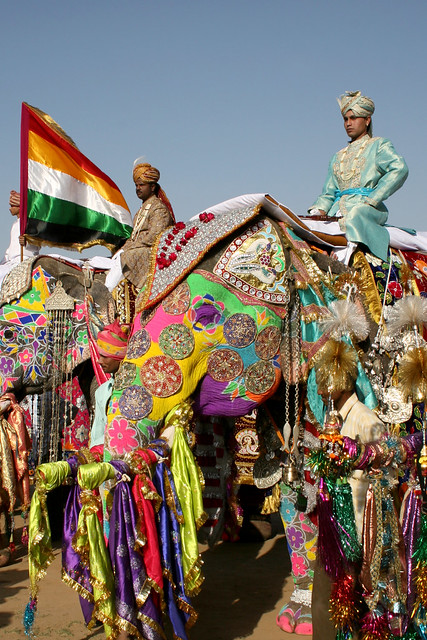 On this day, the elephants march in a multitudinous procession, very showy and photogenic, accompanied by dancers and musicians who perform traditional songs and dances. Characteristic are the riders and companions, with their impeccable red turbans. The sound of trumpets (called ” bankiya “) offers a unique atmosphere.
The elephants, which are always female, walk majestically, adorned with jewels, flowers, palanquins, colorful paintings and fabrics . Not in vain the elephant has been a symbol of royalty and a very precious asset for the Maharajas. Sometimes even other animals, such as horses or camels, join the parade.

They also participate in spectacular sports , such as elephant races, polo matches or even elephant fights, for which they are sometimes dressed as wars, with shells or armor like the ones they used to present in battles.

Jaipur, the capital of Rajasthan, thus pays homage to the elephant, a symbol of health and strength for the Hindu tradition since ancient times and recently proclaimed National Heritage of India .
The Amber Fort, just 6 kilometers from Jaipur, is another essential enclave to experience the festival.
Although it has its origin in Jaipur, however the Elephant Festival is celebrated and is gradually expanding to other enclaves of Indian geography (Kerala, for example), even in Nepal.

Read More
7 things NOT to do in India