Monzón  is an Arabic word that means “station.” At the end of May, the stream of jet air from the upper atmosphere (j et stream ) from the west, which regulates the temperature in the Gangetic plains during the winter, plummets and begins a journey to the south. from the Indian subcontinent and then towards Bengal. From there it returns again, provoking first rains in the East Himalayas, then westward and eventually spreading to the whole country. This is the main monsoon, the so-called “Summer Monsoon” or “South-West Monsoon”, and it is usually extended from May to the end of September or the beginning of October. 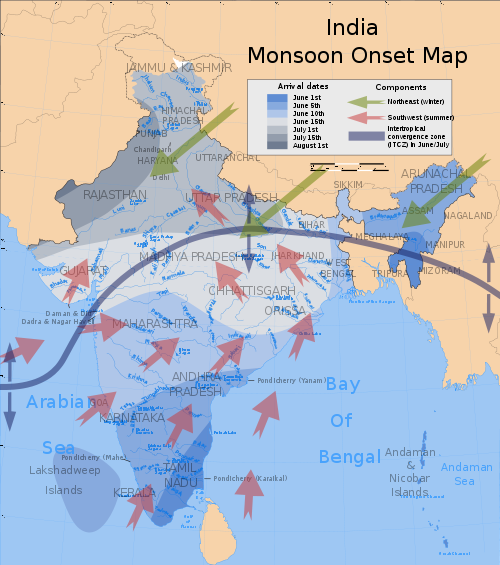 The phenomenon of cyclones is much more complex and has to be included within the general dynamics of the planet. Everything begins when the Earth begins to change the inclination of its axis approaching the sun; in the summer of the northern hemisphere. Then, the Indian land mass begins to heat up. The air masses of the Indian Ocean move towards the Indian peninsula, being loaded in its path of humidity and unloading first in the western coasts of the south, still without penetrating excessively in the continent. Another branch of the same current (the main one) deviates to the right, towards the east coast and the Gulf of Bengal, until it meets the powerful orogenic barrier of the Himalayas. It rains then with enormous virulence in Bangladesh, Nepal and the whole Bengal region. Slowly,

Undoubtedly, the monsoon is something  to take into account to plan your trip . Depending on the area you want to visit, you can condition your vacation a lot. In summary, do not forget:
·  Dates : from May to the end of September or beginning of October.
·  Zones : it affects the south and east of the country with special intensity, extending later to the entire subcontinent, usually with less virulence.
·  What happens : Heavy rains and a lot of relative humidity in the environment.

Mehandi, the art of painting the body with henna

Read More
Mehandi, the art of painting the body with henna