The ‘no’ of girls

The ‘no’ of girls

Married marriage and child marriage, in India become an impressive binomial, not only because of the harshness of the reality that surrounds it, but also because of its overwhelming figures and consequences.

To understand the depth of the subject, we must think about the metaphor of the fish that bites its tail … More than 90% of marriages in India are marriages arranged or arranged by families . In almost all of them are “negotiated” dowry ( dowry ) that the parents of the bride must pay the parents / family of the groom and unfortunately reaches almost limitless proportions.
The younger the girl is, the lower the dowry that must be paid. Almost half of the women (43%) get married while still girls. 83% leave school when they get married. 22% become pregnant before the age of 18. Six thousand teenage mothers die every year …

Who can break the chain? How to break it? In which link of the same can a girl pronounce the dreaded “I do not want”? Can you really do it, leave them?

Faced with this bleak and unfortunately everyday scenario, we find some “voices of hope” … sweet and soft voices that become deep and serious when they talk about their “revolution”, when they shout at everything and everyone the so feared and humiliating “I don’t want” , thanks to these little big voices, change will be possible one day … 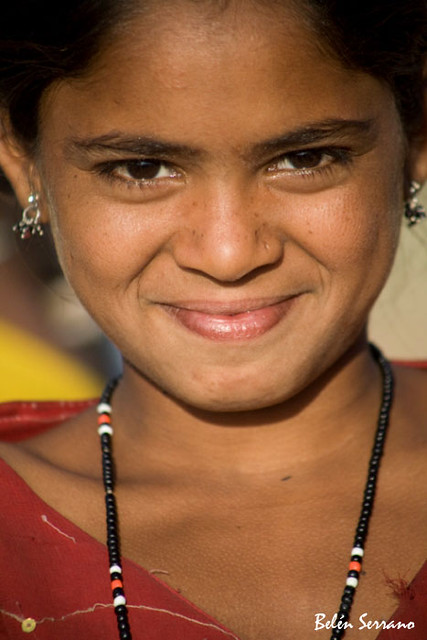 Kalkota: Binda Kalindi, 12, wants to meet President Pratibha Patil. She also wants to go to school and become a teacher, an ambition that provokes anger and anger at her father, Parikshit, and that often leads to a beating.
Pariskhit, a day laborer, would prefer that her daughter marry and form a family as her other daughter, Saraswati Kalindi, two years ago, when she was the same age as her sister Bina, 12 years old.
The “boyfriends” chosen by her parents, have already come 5 times to ask for Bina’s hand, but each of those times, the girl has said “NO”, threatening to run away from home if she was forced to marry. 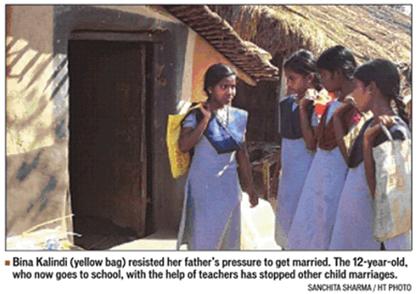 What has inspired Bina to want to study has been another 12-year-old girl, Rekha Kalindi . Rekha lives in a community close to that of Bina, and together with two other girls she received the “Courage Award” from the President, for saying “NO” to her arranged marriage. The story of Rekha was published in January 2009 in Hindustan Times.

Inspired by Kalindi’s story, another 35 girls have refused to marry at the age of 12 and 13 during the past year. These 35 girls are the tip of the iceberg of social change, says the District Commissioner of Labor. “Many parents do not want their young daughters to marry, but the need for them to do something in their lives is heavier,” says Prosenjit Kundu, assistant to the Labor Commissioner.

“I fought to go to school and my father accepted it, then I promised him that I would continue cooking and cleaning the house,” says Bina, who is now in Class III at the school.
Bina and her friends, along with their teachers, have managed to stop other children’s marriages. Most girls want to be older teachers, because they are their heroes for having changed their lives. “It would be wonderful to have more teachers in the district,” says Kundu.

Read More
Travel To India For Holi The Festival Of Color