The famous three sad tigers are now four.
The last official census of tigers, published recently, counts 1,706 tigers released throughout India . Five years ago there were 1,411 copies, which indicates that the species grows little by little … but very little by little.
A century ago, for example, 100,000 tigers inhabited Indian forests were estimated.

More than half of the tigers that exist in India currently live protected among their National Parks . However, about 30% live in freedom, more exposed and vulnerable to human activities.

And there are several threats to the survival of this majestic animal. The increasing deforestation of their habitat, the increase and displacement of the population towards natural and rural areas, including poaching and the illegal market of skins, bones and dentures, claws, etc. The illegal trade of tigers affects different markets, among others that of traditional medicine, which gives it almost magical properties.

Under normal conditions, a tiger usually lives about 20 years. 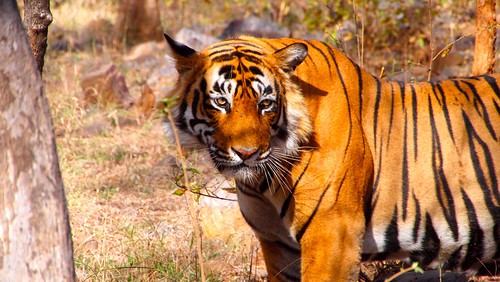 In these natural parks the safaris that offer the tiger sightseeing or sighting of tigers are common. However, we must be prepared not to achieve it.
The tiger, by nature, is not a species that can be seen. Sighting it is really difficult and depends on weather conditions, the time of day and the animal’s own habits. In some natural parks, when one or a few are sighted together (usually when they have already eaten and rest peacefully), the buzz and caravan of jeeps around can be considerable. So much that sometimes we can even disappoint the experience.