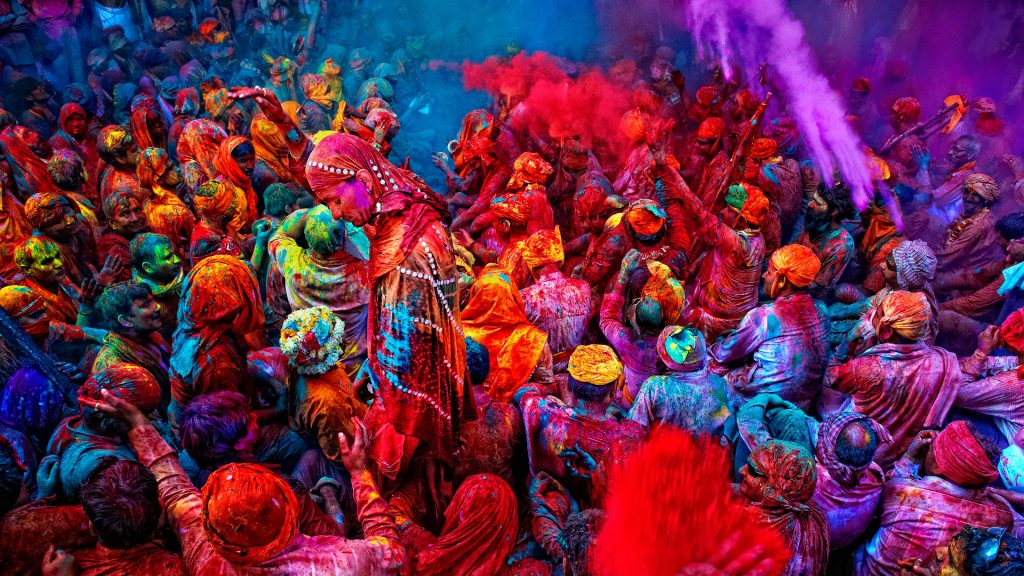 If there is a mythical celebration in the Indian subcontinent that is Holi, the greatest pride of an India that every spring succumbs to the magic of colors. Would you like to travel to Holi and experience one of the most special festivals in the world? 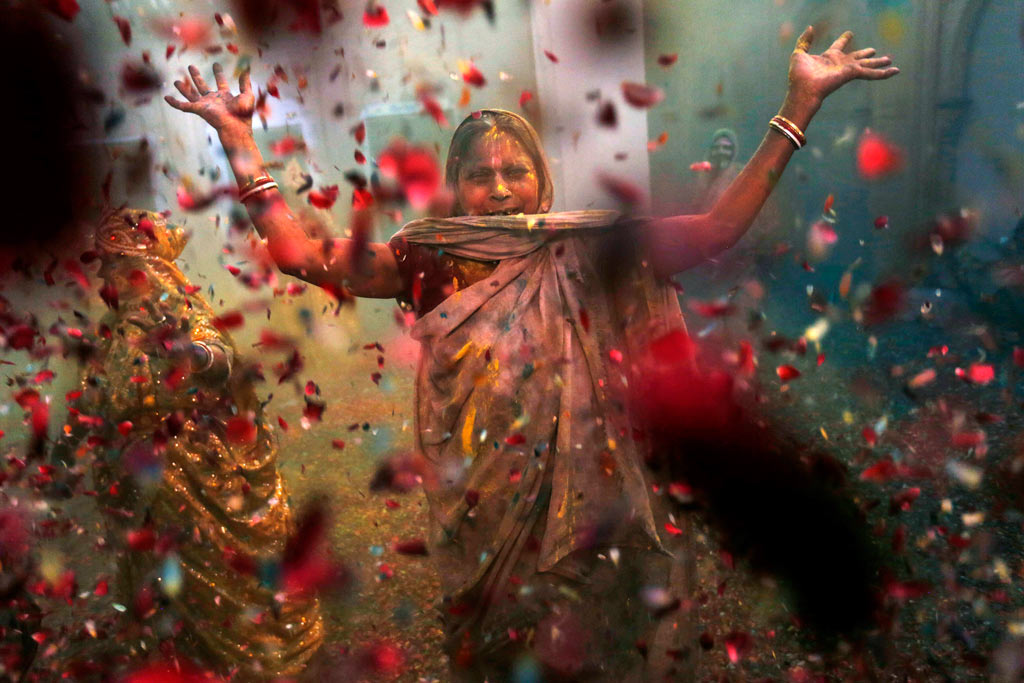 Legend has it that the ancient king Hiranyakashipu went into a rage when his son, Prince Prahlada , confessed to him that he did not believe in him, but in the god Vishnu. This was enough reason for the king to send his sister, the evil Joliká , to light a bonfire in which to let the prince burned by the flames die. However, the appearance of Vishnu shortly before the final moment ended up condemning the king and his sister, saving Prahlada from treason. Moral? Good always overcomes evil .

Another story tells that a young Krishna received the blue color of his skin through the maternal (and poisoned) milk  of the goddess Putana. A complex that she tried to solve when she fell in love with a young woman from a nearby town, Radha, to whom she suggested painting the colors so that her blue would not be out of place and both could be together.

Two stories turned into souls of the Holi , the festival of Indian colors that every spring invites the people to forgive, love and laugh.

A party that begins on the first full moon night of the eleventh month of the Hindu calendar, usually at the beginning of March, with the one known as Holika Dahan,   which revolves around the same bonfire in which the evil Joliká came to burn. During this evening, the Hindus take the opportunity to make gifts, prepare sweets such as the delicious pebble, a pie filled with dried fruit, or succumb to the romance between fire shavings and sandalwood aroma.

A magical night that continues a day later in which Holi takes place as such.

During this great day, the Hindus take to the streets and, armed with powder paint, they throw colors at each other. Some ointments known as gulal whose color corresponds to different meanings: for example, red represents love and fertility while green means hope.

A party that is worth knowing not only for its unique and folkloric character, but for a time when India enjoys the best temperatures of the year .

Where to live Holi? 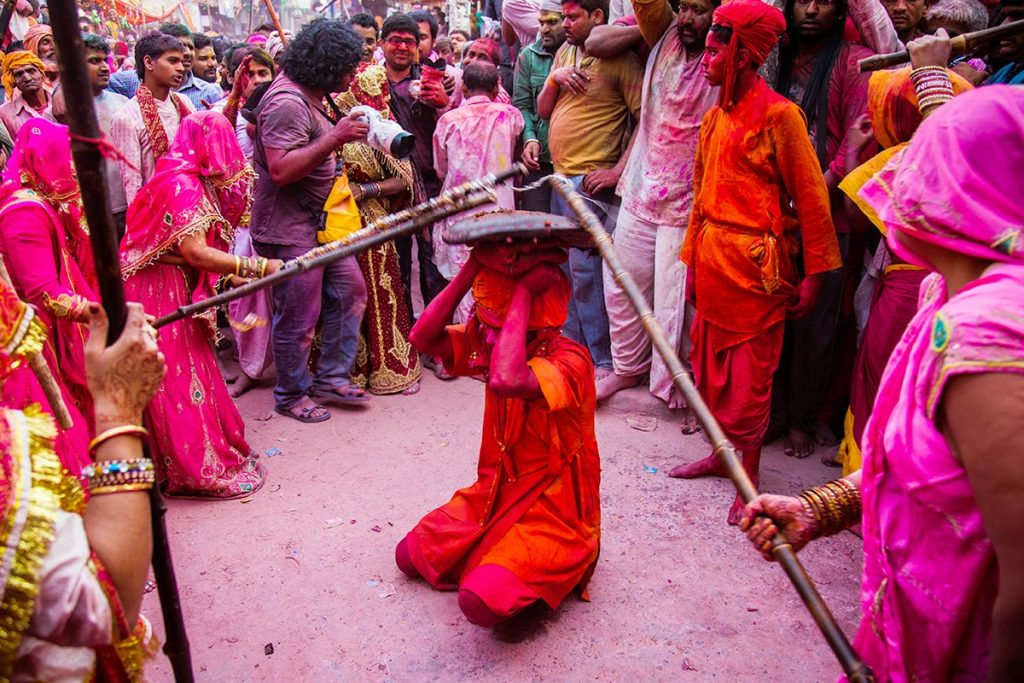 Although the Holi is a universally known festival in India, we can choose different visions of it throughout the Indian subcontinent.

One of the most famous versions is Lathmar Holi , during which the women of the village go to the square where they beat the men with a stick. Of course, in a fun way that takes as an inspiration the persecutions of Krishna by the friends of Radha to play the Holi. A curious festival that is celebrated in the state of Uttar Pradesh, more specifically in the villages of Vrindaban and Barsana  not far from Mathura , the birthplace of Krishna and the best place to live Holi from all over the world .

If on your part you have arrived in Delhi , different parties vibrate around the city between DJ’s, colors and laughs in a much more cosmopolitan atmosphere. And while, Jaipur welcomes even more colors and even a festive Elephant that is celebrated on the same day as Holi.

If in your case you are lovers of literature, Bolpur, in the state of Bengal, gathers Tagore recitals among colored powders, games and women dressed in yellow representing abundance. A version called Basant Utsal that links with the turmeric color that invades Manjal Kuli, the discrete Holi of Kerala . 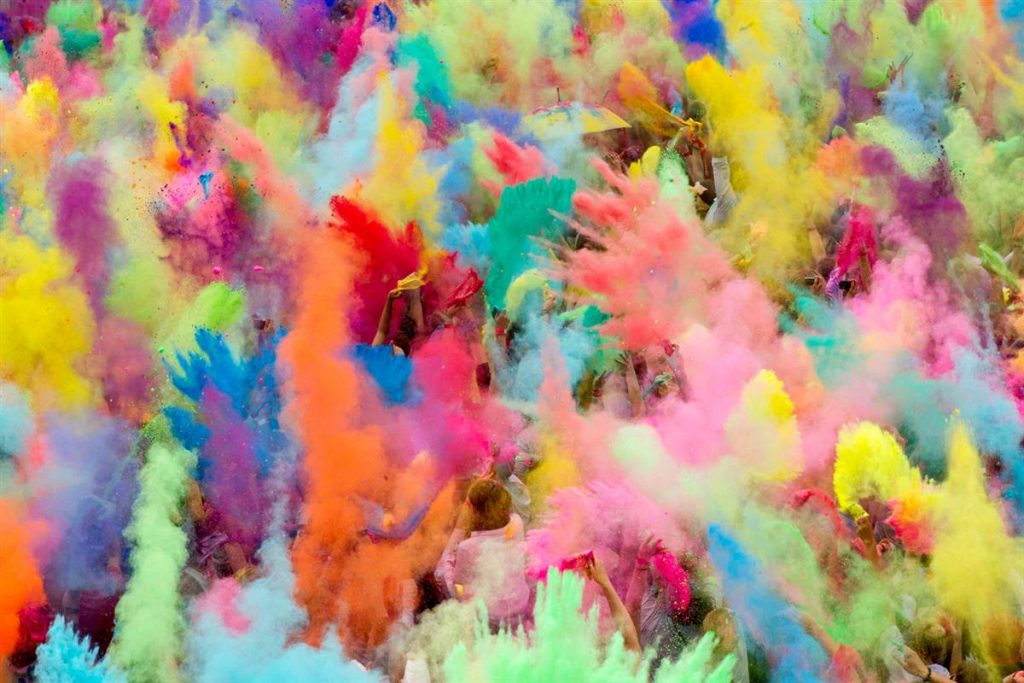 For its part, in northern places like the state of Punjab , the Holi is celebrated as Hola Mohalla, a day reserved in honor of the Sikh warriors through more solemn but equally enjoyable rituals.

Shades of a party that is celebrated throughout India , Nepal or Sri Lanka in addition to other Western countries or those in which there are large Hindu communities such as Indonesia, the United Kingdom or the Caribbean Trinidad and Tobago.

Holi with the Geographical Society of the Indies 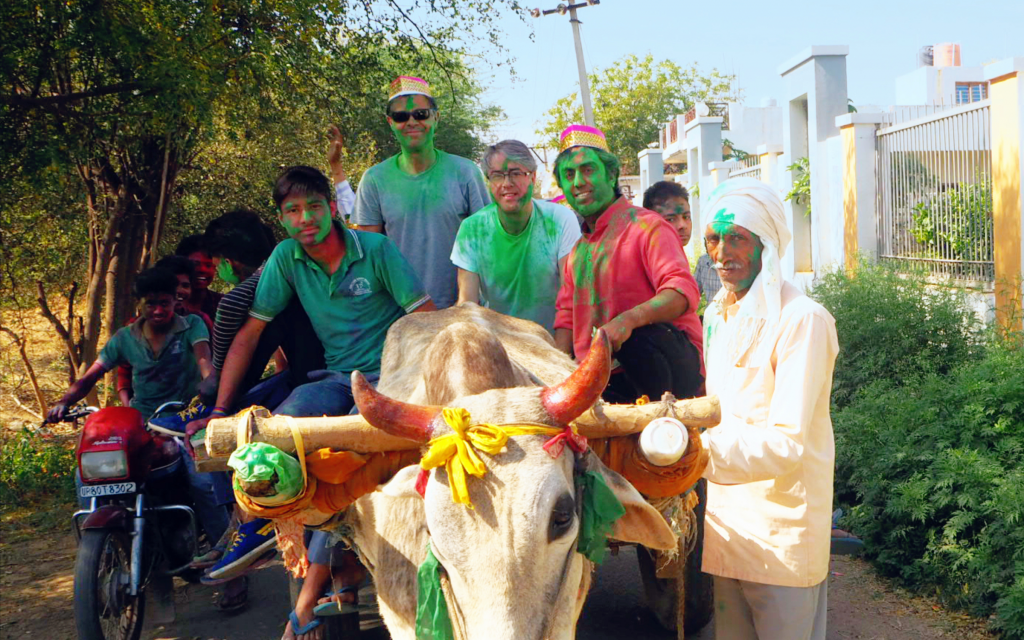 When we want to get into the tradition of another country it is good to have a wide range of possibilities when it comes to turning events like the Holi into  the most unforgettable experience of your life .

At Sociedad Geografica de las Indias we take care of making you live the Holi in many different ways, always with the help of a guide in Spanish and a private driver that will allow you to enjoy the party in first person, either through the car itself or bathing in colors with the rest of those present.

Regarding more select experiences, hotels like the  Rambagh Palace  in Jaipur celebrate their own Holi among lush gardens and dinners  once attended by personalities such as Jacqueline Kennedy or Prince Charles.

In addition, a week before traveling to Holi we organized a tour of the “cities of Krishna”, where you can contemplate the spectacle of women beating men with sticks or letting you wrap all the colors from a privileged corner.

In case you want to enjoy a different and much more traditional experience, we bring you to our favorite village in Agra , not far from the Taj Mahal . Here you can enjoy a warm and peaceful Holi  between families that will make you feel one more to finish with a tea with pastries in the portal of your house.

All this, of course, enjoying the best luxury hotels  in India worthy of Maharaja from which to move around the party.

Because, just as there is an India for each person, there are also many nuances of a Holi that you can live in the best way.

Read More
Best Ayurveda resorts in India: In the (good) hands of nature
2 years ago
DestinationsInformational