In the mid-16th century, Akbar the Great had set out to build a new city for his growing empire. As the canons mark, he consulted the prophets, astrologers and sages of his court and pointed out the place and the precise moment in which the works should begin.

The place chosen was Sikri, a not very leafy environment 38 kilometers from Agra , the city of Taj Mahal (not yet built). A few years later, after the victory against Gujarat, the prefix of Fatehpur was added. Fatehpur Sikri, “the City of Victory.”

It was a monumental work. For the construction of the city, conceived for the purpose of housing the capital of the Mogol Empire , they spared no effort. It must be a demonstration of the power of the emperor and his entourage, a self-sufficient city with all the necessary services. With its walls, its mosque and its imperial palace, its artificial pond in the center, with its temples, its administrative areas and meeting points for the inhabitants.

In 1585, in full swing of the place, the English traveler Ralph Fitch wrote in his diary that this city was considerably larger than London, and more populated.

However, something failed. No one had taken into account the heavy periodic droughts that plague the area. And there was no way to bring water to such an imposing site.

It was abandoned only 17 years after it was finished.
And so it was, like a whimsical luxury abandoned to his fate, a ghost town.
Successive looting devalued their treasures, but their structure remained intact, like a magnificent skeleton of imperial splendor. 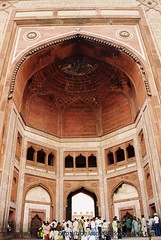 The entrance (called Bulland Darwaza) is a declaration of intent, with its 50-meter high porch and the access stairway (currently full of street vendors assaulting the tourist). View from below, before starting to climb, it is really impressive.
Once inside, attention is drawn to open spaces, courtyards , squares and streets conceived broadly, such as to host large events and large flows of armies, people or merchandise.
Also the color, of red sandstone, of all the constructions and the architectural motifs that adorn it, reliefs or columns with decorated corbels, domes on open turrets as terraces.
It must be impressive to see this city “dressed” with banners, colorful fabrics and silks in the wind, canvases, lattices and torches.

The Imperial Palace is made up of several pavilions linked together, such as the “Women’s Pavilion” ( Panch Mahal ), with its 5 floors in the form of a stepped pyramid, or the Audience Rooms (the public: Diwan-i- Am and the private one: Diwan-i-Khas ), reserved for the emperor’s meetings.
Also noteworthy is the Mosque, which houses the only building built in white marble, highlighting the general tonic: there is buried Akbar’s trusted holy man, Salim Chistie, which is why the place is a pilgrimage center.

Fatehpur Sikri is today a town of almost 40,000 inhabitants. The environment of the ancient city is a UNESCO World Heritage Site . It is an open-air museum and a highly recommended visit; A perfect stop to liven up the journeys between Jaipur and Agra.