India  occupies a huge extension to South Asia. It is located at the geographical coordinates: 20 00 N, 77 00 E. We can consider it a subcontinent. Its wide surface (3,287,590 km2) is equivalent to 6.5 times the surface of Spain, and its geological, climatic diversity and landscapes that entail justify this qualification. 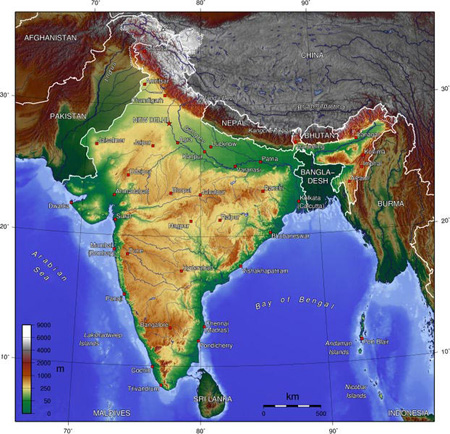 It borders the Indian Ocean, the Bay of Bengal and Bangladesh to the east, Pakistan and the Arabian Sea to the west, the Himalayan chain and Karakorum with China, Nepal and Bhutan to the North and Sri Lanka to the south, with Comorin being the southernmost point.

The elevated areas of the Indian subcontinent are constituted by the DECCÁN TABLE to the south and, above all, by the imposing Himalayan mountain range   to the north. While a huge area of ​​flat or undulating terrain appears along the  Ganges , which determines an extensive and fertile valley.

Finally and to the northeast we find the  Thar Desert , a natural border between India and Pakistan.

Deforestation, soil erosion, over-exploited pastures, desertification, environmental pollution from industrial and vehicle emissions, water pollution from direct discharges of wastewater and those contributed by agricultural pesticides, domestic water is not potable throughout the country . The huge and rapid increase in population is a threat to natural resources.

Climate: It  varies from the typical monsoon in the south to the temperate in the north.

The diversity of climates is once again one of the key aspects of this enormous country of contrasts, from the icy winters of the Himalayas to the tropical environments of the Coromandel Coast in the South, from the rainy and humid states of Assam and Bengal in the Northeast to the Great Indian Desert of the Rajasthan in the West. A possible classification would be the following:

* REGION OF THE HIMALAYA , with the logical differences according to the altitude, summers from 18º to 2000 meters and from 0º to 4500. In the lower valleys between 32º and 38º. The eastern part of the chain receives much more rainfall than the west and is therefore more prone to flooding.

* ASSAM and BENGALA  Occidental with extremely wet and rainy weather. The state of Meghalaya takes the palm of the highest rainfall on the planet with its 10,900 mm. annual

* LLANURAS DEL GANGES  with temperatures that in winter can reach 5º, but with notable variations. In the West, in the Western Ghats and coastal areas there is heavy rainfall during the summer monsoon (Southwest). The peninsular interior with 650 mm socks. per year but also with very significant differences according to places and years. The Eastern Ghats receive less rain than those in the West, with an average of 900 to 1300 mm. annual The Rajasthan and north of Gujarat in the West, presents an almost completely desert landscape.

* The North of the Decan Plateau  receives the best rains during the summer monsoon. On the other hand, the southern part is a bit “in the shade” of the monsoon and only receives between 50 and 1000 mm. The temperatures of these interior areas are more moderate, between 15 and 38º. Apart from the areas directly influenced by the presence of the Himalayas, heat can be oppressive and sometimes threatening to human integrity, as happened in 1994 and 1995. The steamy environment that can exceed 48 degrees and relatively dry is the norm before the summer monsoons appear  , which with their rains and humidity leave the sky covered with clouds that soften the temperature slightly.

Read More
The Colors Of India
Submit a Comment