That India offers the traveler some of the most special accommodations in the world is a fact, and details like this prove it.
Condé Nast awarded the 2009 Readers Award to the Taj Rambagh Palace Hotel in Jaipur as ‘ Best Hotel in the World ‘. And he really deserves it.
The Rambagh Palace, built as a hunting lodge in 1835, became in 1925 the official residence of the Maharaja of Jaipur and from then on it experienced its moments of splendor as a royal residence.

Taj Hotels Resorts and Palaces has converted the Rambagh Palace into one of its flagships, next to the Taj Lake Palace in Udaipur and the Taj Mahal Palace in Mumbai. And it has made it a memorable accommodation, an experience in itself, symbol of hospitality and Rajput tradition, which allows the traveler to immerse themselves in the magical world of the Maharajas while enjoying all the comforts of a large contemporary hotel.

Beyond the aesthetic virtues of the Rambagh Palace, the know-how and the exquisiteness of its service are intimately related to Indian concepts about hospitality and service to others. Throughout more than 47 acres of garden, its 33 elegant and cozy rooms and its more than 40 suites, the lucky traveler to enjoy the Rambagh Palace can discover the subtlety in the details. From the spectacular floral arrangements placed daily, to the relaxing corners of the hotel, such as its magnificent swimming pools, exterior and interior (in the photos, below) or its Royal Jiva Grande Spa inaugurated in 2007, the staff of this establishment leaves in evidence that there is only one objective: the comfort of its guests. 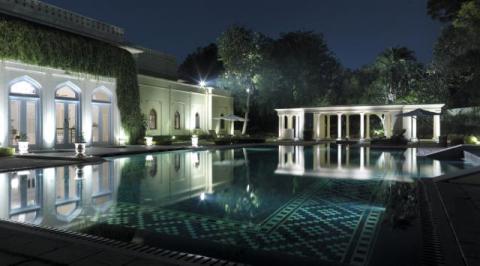 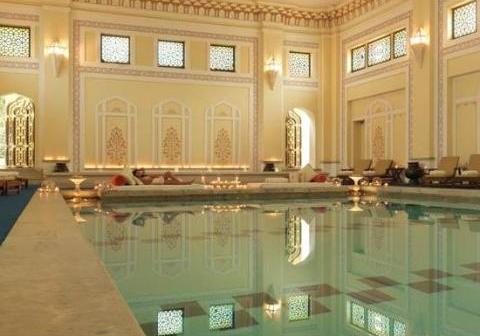 And beyond all of this, it is History that sets Rambagh Palace apart from other luxury accommodations in Jaipur.

Gayatri Devi (1919-2009), better known as Raj Mata (queen mother) by the inhabitants of Jaipur, had a life as exceptional as the site she lived. Queen of Jaipur, was chosen by Vogue magazine as one of the 10 most beautiful women in the world. After living the life of luxury and usual eccentricity among the Maharajas, Gayatri Devi went from hunting (killed his first panther at age 9) to become an environmental activist. From his life as wife of the Indian ambassador in Madrid and his meetings with friends like Jaqueline Kennedy, to jail, in which she was imprisoned in the 70s, during the period of the Emergency declared by Indira Gandhi.

He participated in politics for 15 years, becoming a fierce opponent of the Congress Party led by the Gandhi and has the Guinness Record of the greatest advantage obtained over adversaries in democratic elections.
As a policy, she was concerned about the situation of women in India, launching educational initiatives aimed at them.
She was a woman of lights and leftovers, but in any case, of those women who fascinate those who know them … And her presence is still felt in the Rambagh Palace. She was in charge of the decoration of the Maharani Suite and her portrait impacts anyone who enters the so-called Rajput Room.

The feeling that the traveler has in the Rambagh Palace is that it is all true, tangible. There is no artifice. The history of the palace itself and the solvency of the management of Taj make this option one of the most solid for the stay in Jaipur and therefore one of the favorites of the Incredible Rural India , convinced that our travelers deserve The best experience.

Read More
Best Ayurveda resorts in India: In the (good) hands of nature
Submit a Comment