On August 15, 1947, India proclaimed its independence from Great Britain. What had been the most important colony of the English managed to end more than three centuries of domination with the victory in the struggle for emancipation begun a century ago.

To understand the arrival until that August 15, date erected in a national holiday, we must look back and retrace the vast path that the Indian people undertook to achieve their sovereignty.

The basis of the independence movement began with the rebellion of the Cipayos against the British East India Company . This association, created in principle to manage commercial transactions, exercised absolute control over the Indian subcontinent managed to crush the revolt against British power, but it remained latent. In fact, the following decades were of intense political activity, and the Congress Party was founded, the first to rule India from the year 47.

Although it was the arrival of the person who could lead the current of nationalist emancipation, Mahatma Gandhi , which massively mobilized a people who had already fought and given their lives in a world war next to their metropolis and saw compensation needed . 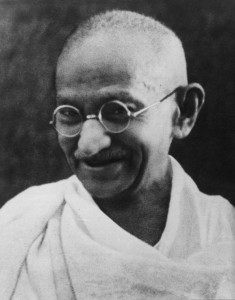 Thanks to the non-violent protest and civil disobedience, the leader par excellence of the Indian people managed, together with the number one of the Party, Jawāharlāl Nehru, (both belonging to the intellectual and knowledgeable class of Western life) put on the table in 1929 the first formal request for independence, followed by the Salt March, which left British pride badly hurt by giving it a pulse by directly attacking the monopoly that the United Kingdom had in that country on salt. The arrival of World War II only delayed the inevitable a few years. The movement “Leave India” was the coup de grace to a Britain weakened by the Germans. And the Clement Attle Labor government had no choice but to allow in 1946 the creation of a Constituent Assembly and an Indian transition government that will give way to the Nehru government.