While the rest of the country succumbs to the monsoon, the so-called “Indian summer” finds in the Spiti Valley the coolest response to those who arrive in northern India looking for adventures, mountains and villages as enigmatic as their mystical winds. The true meaning of “expedition” is waiting for you. 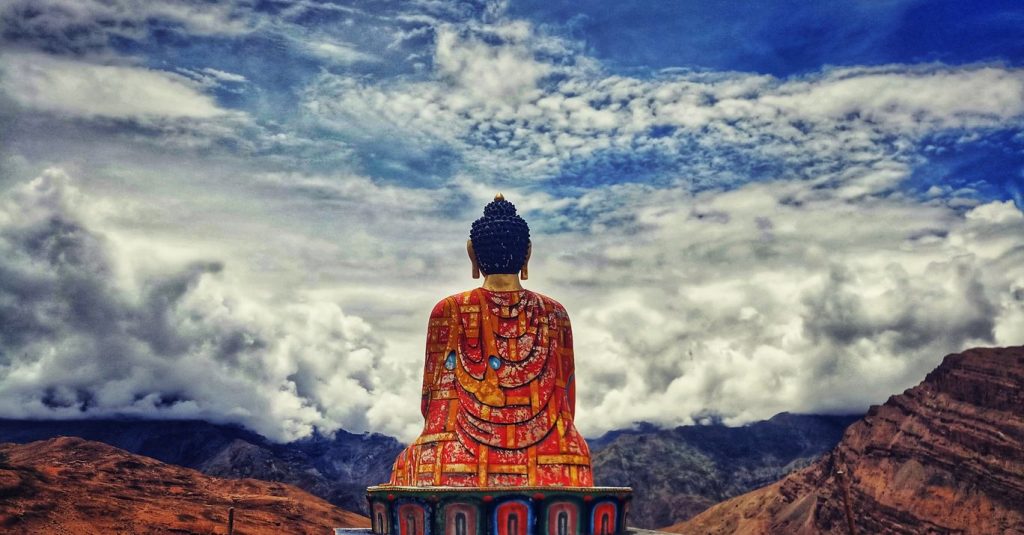 The world could be divided into two types of places: those visited and those others where to experience a somewhat extinct sense of adventure on an increasingly globalized planet. One of these few places can be found in North India , displaying a range of places away from conventional tourist routes and where to find one of the most fascinating scenarios on the planet .

Stroking the Himalayas and nicknamed by some locals like ” Little Tibet “, the Spiti Valley, in the state of Himachal Pradesh , is a scenario where asphalt roads still resist in some sections, the villages are rocked by millenary winds and the Monasteries expire a peculiar mysticism, in the middle of a line that separates two worlds. 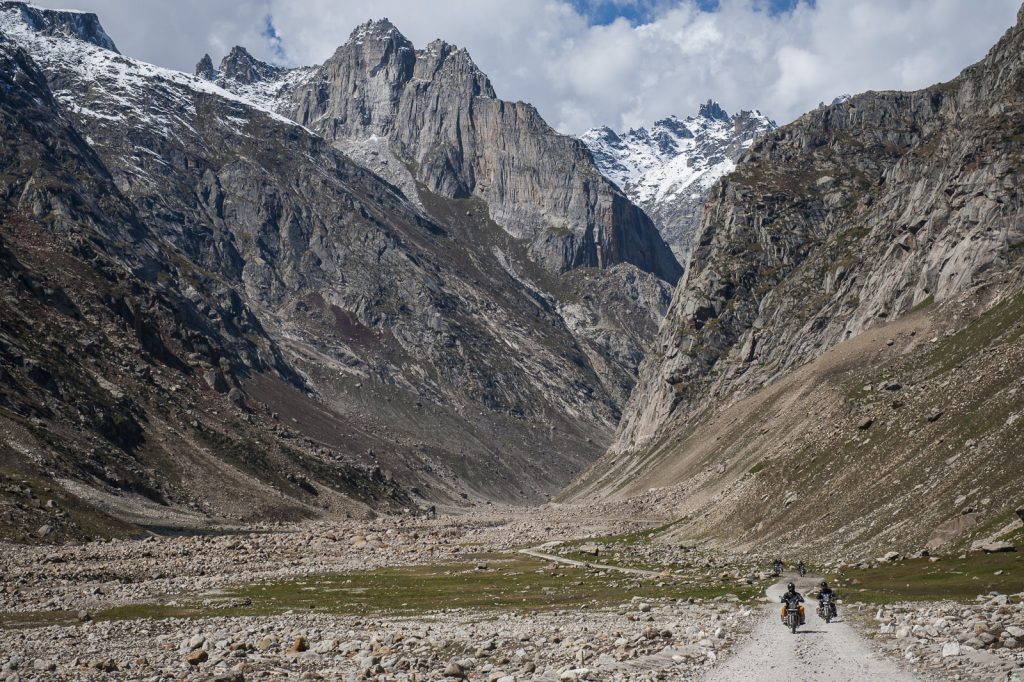 From Manali to Spiti on the back of a Royal Enfield. © Sephi Bergeson

A place where you can visit the following places, if possible, with an accompanying guide who knows the best way to turn your expedition into a worthy travel notebook.

If you also decide to ride a  Royal Enfield  when it comes to tame these remote roads, the adventure is guaranteed.

Are you ready to know all the places to see in the Spiti Valley ? 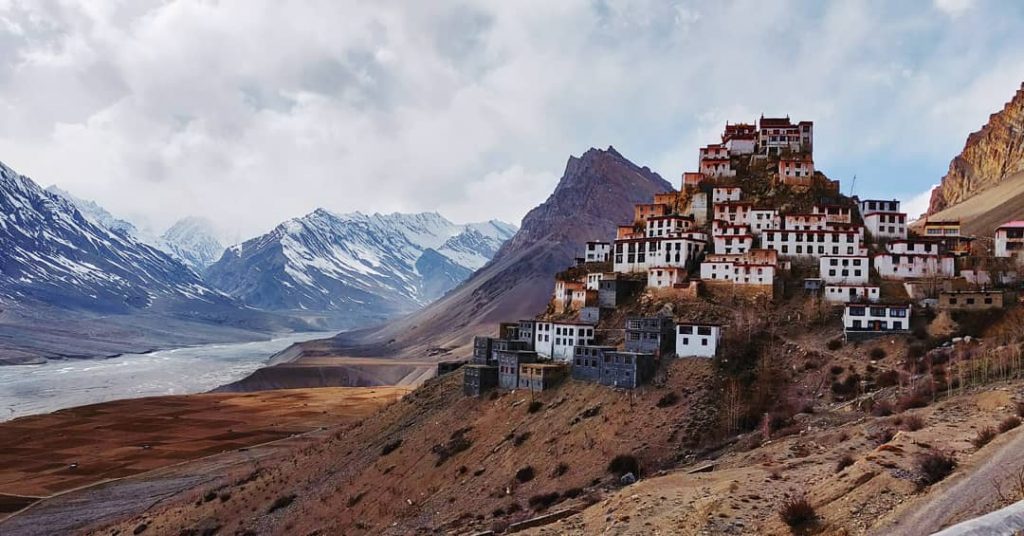 Key Monastery, the most famous monument in the Spity Valley. @ spitikarrtikcchele

Located at 4166 meters above sea level , the Key Monastery, also known as Kye Gompa, is the most famous attraction in the Spiti Valley . A place of birth for some 350 lamas , masters of Tibetan Buddhism so present in these lands, it is believed that the monastery was founded by Dromtön, a pupil of the famous master Atisha in the eleventh century. An icon that over the centuries was not only eroded during the arrival of the Mongols, but also because of looting, fire or the war between Ladakh and Kullu. Looking out over the famous Spiti River, the Key monastery seems like a majestic icon that invites you to get lost in its temples, painted murals or silent streets on which prayer flags hang. A must during any visit to the Spiti Valley as well as the ideal setting for any photographic trip in India . 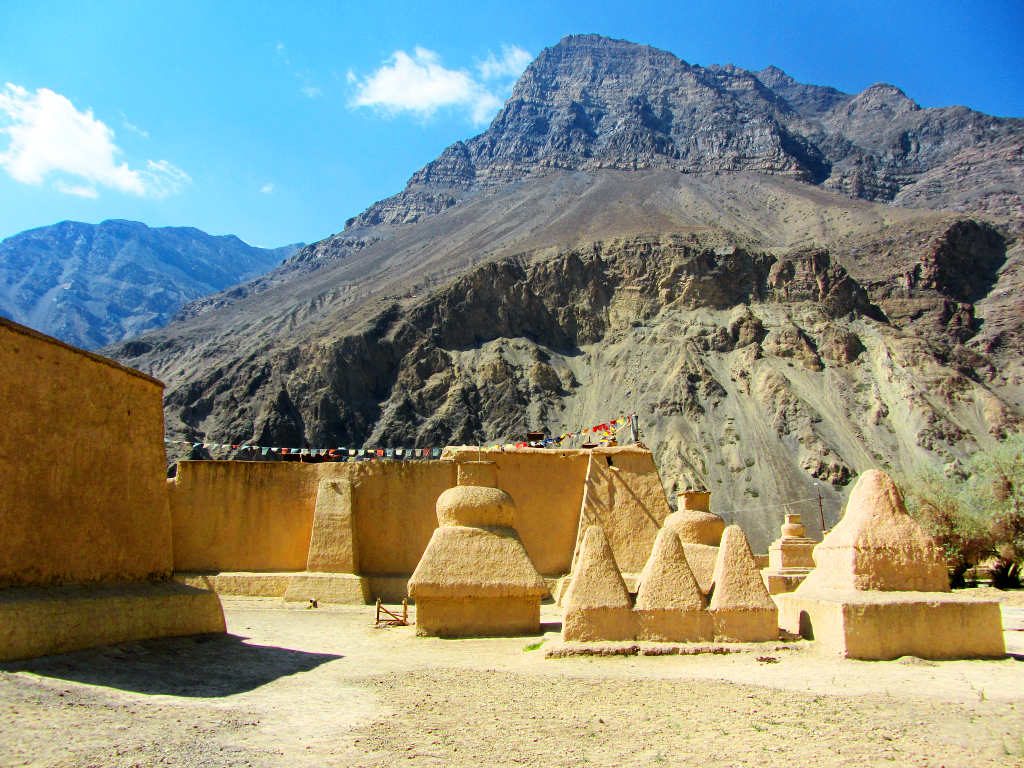 Stupas in one of the temples that form the Tabo Monastery. © Traveldglobe

Looking out on the banks of the Spiti River, Tabo is another of those enigmatic villages that you must visit during your stay in the Spiti Valley. A small village famous for the presence of the monastery of Tabo , formed by 9 temples of Maitreya Buddha, successor of Gautama Buddha that, according to the scriptures, would reach the world 9 million years after the east death. A belief that here comes in the form of stupas, murals and frescoes very similar to those we can find in the well-known caves of Ajanta , in the state of Maharashtra , much further south. Currently, Tabo and its monastery serve as a base for 60 lamas. 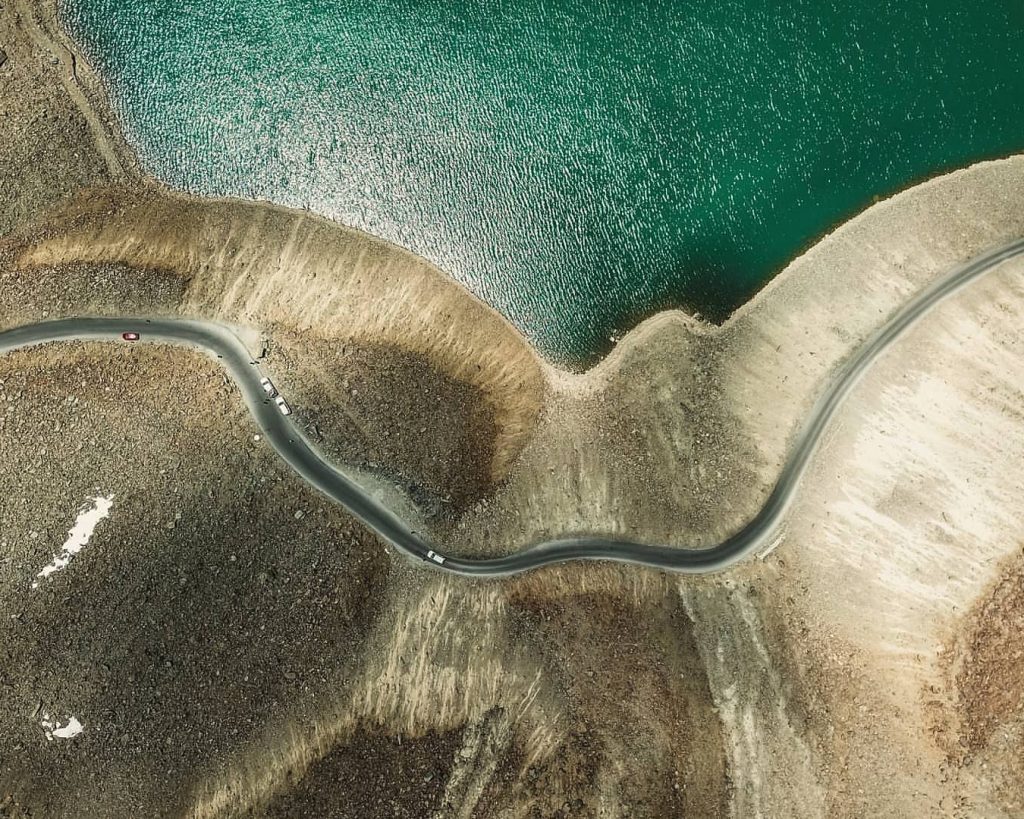 Suraj Tal Lake from above by @bharatdarshan

Also known as Lago del Dios Sol , Suraj Tal is a body of water of a certain emerald color fed by the Bara-lachala glacier in the Spiti valley. It is considered one of the highest lakes in the world to be located at 4883 meters high , being a fascinating stop during any trekking route or stopping place for all those travelers who cross the road between Manali (main base port of the numerous Valley attractions) and Leh. 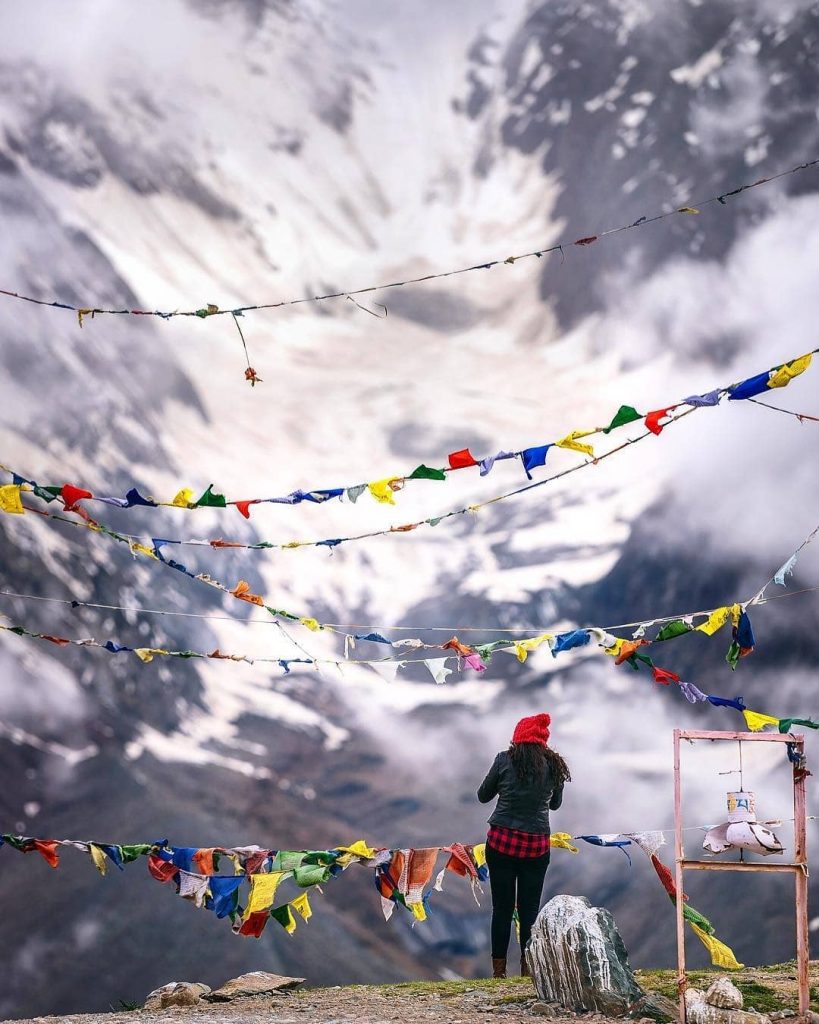 The beauty of Kunzum Pass by @adventure_nation_outdoor

Any great route through the Spiti Valley passes at some point through the famous Kunzum Pass, a mountainous section at 4590 meters high 122 kilometers from Manali. Connect the valleys of Kully and Lahaul , offering a temple that splashes an ocher and white stage that seems to kiss the blueest sky you’ve ever seen. The perfect place to stop to pray or simply listen to the supernatural silence that surrounds each and every corner of this land of mysteries. 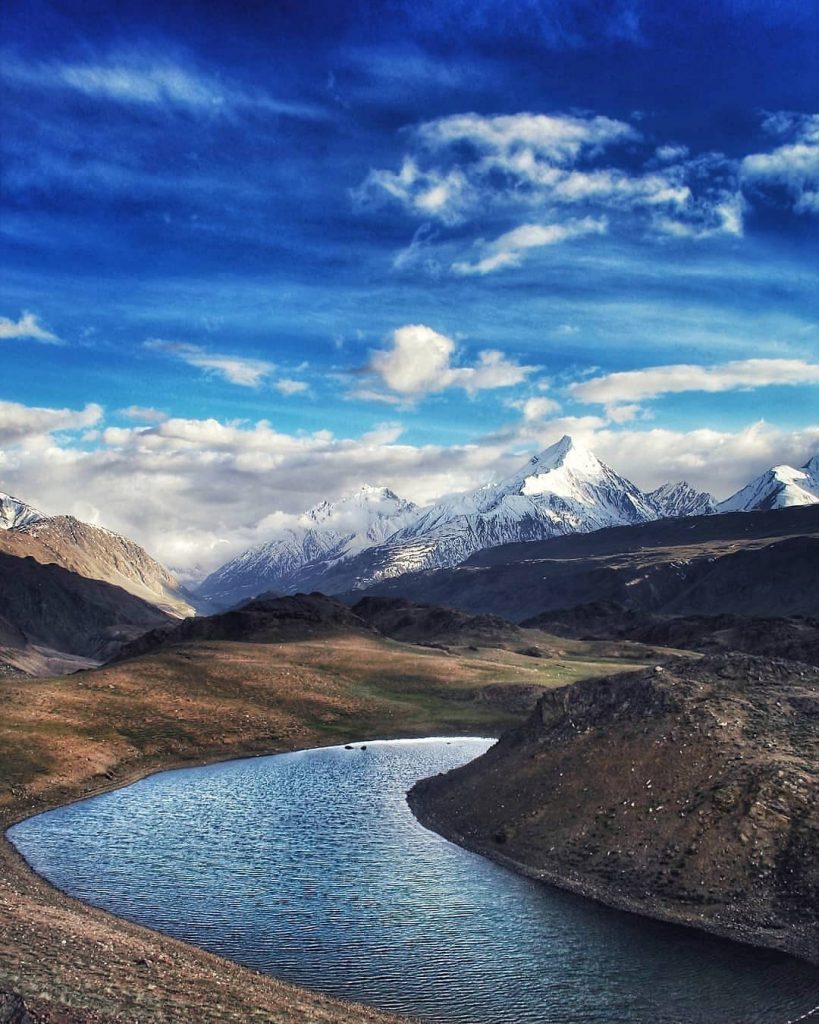 Another of the most famous lakes in the Spiti Valley and perfectly reachable from the Kunzum Pass is this «Lake of the Moon», in the part of the Lahul and Spiti district and not far from the Chandra River . Located at 4300 meters above sea level and in full Himalayas, the lake owes its name to its crescent shape , this being one of those special places to stop during a walking route or to camp under a sea of stars. 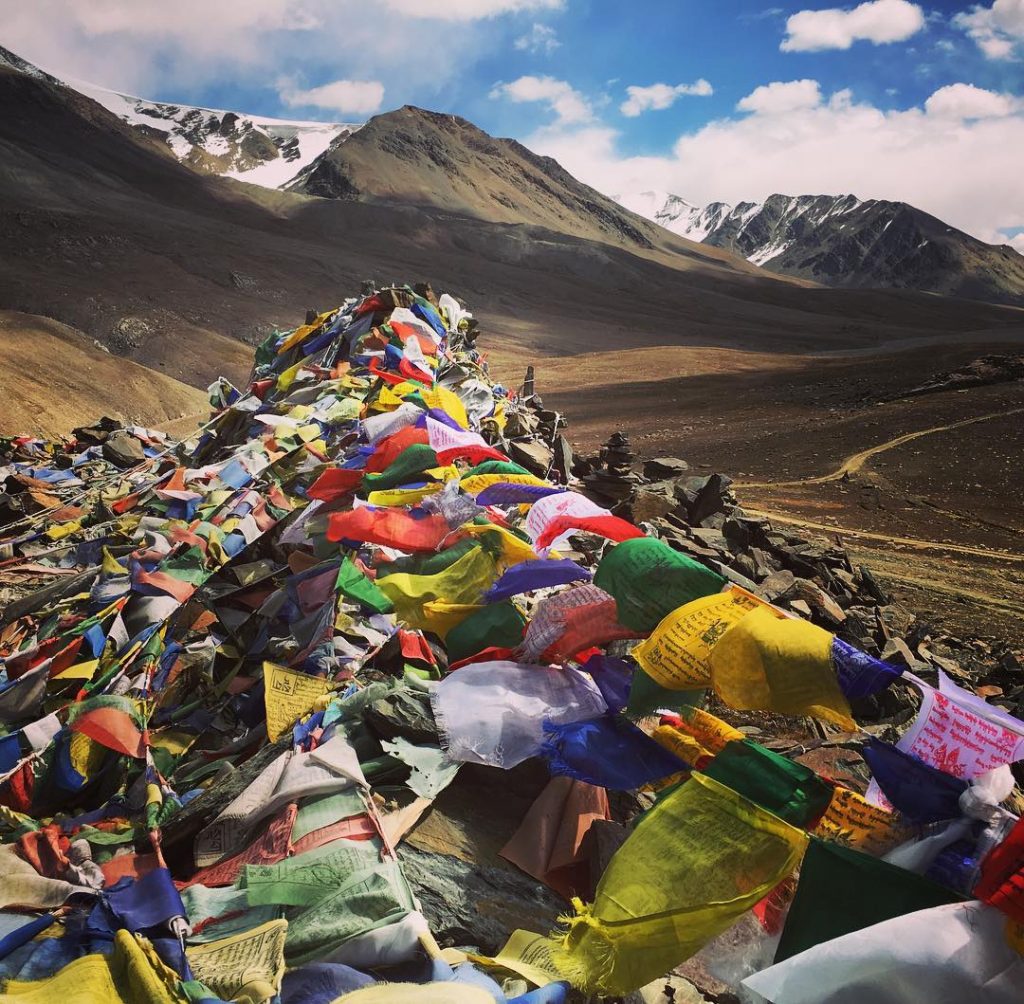 Mentioned by Rudyard Kipling in his famous novel Kim as the place of entry of the lama from Tibet to India, Bara-lacha la Pass encompasses some of the most inhospitable secrets of the valley. A mountain pass of up to 4890 meters high – one of the highest in the world – that connects the district of Lahaul with that of Ladakh in which the misty mountains and the ocher moors whisper stories of another time. 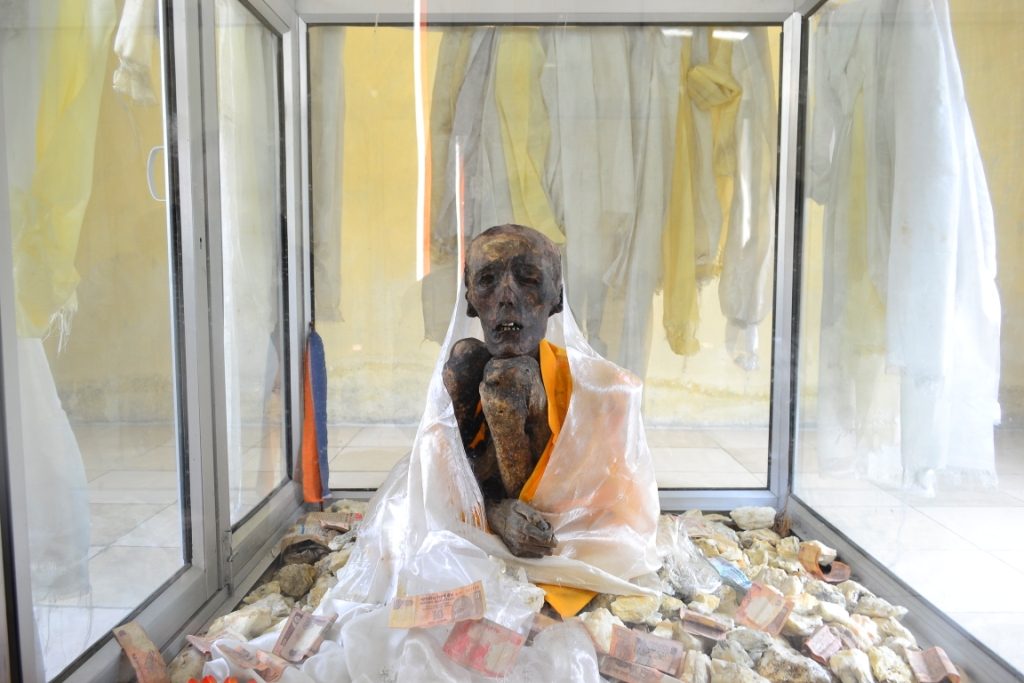 Between monasteries and trekking steps , the Spiti Valley also reserves places, at least, curious. As an example, the town of Giu, located at 3200 meters high and home to a mummy contained in a glass capsule ornamented with the different offerings of the premises. Fed by the mysticism of these lands, it is believed that the mummy belongs to a lama buried by an avalanche for 500 years . Of course, he is granted the status of guardian of a town formed by a few rudimentary homes dotted in the middle of a valley of magic and wind. 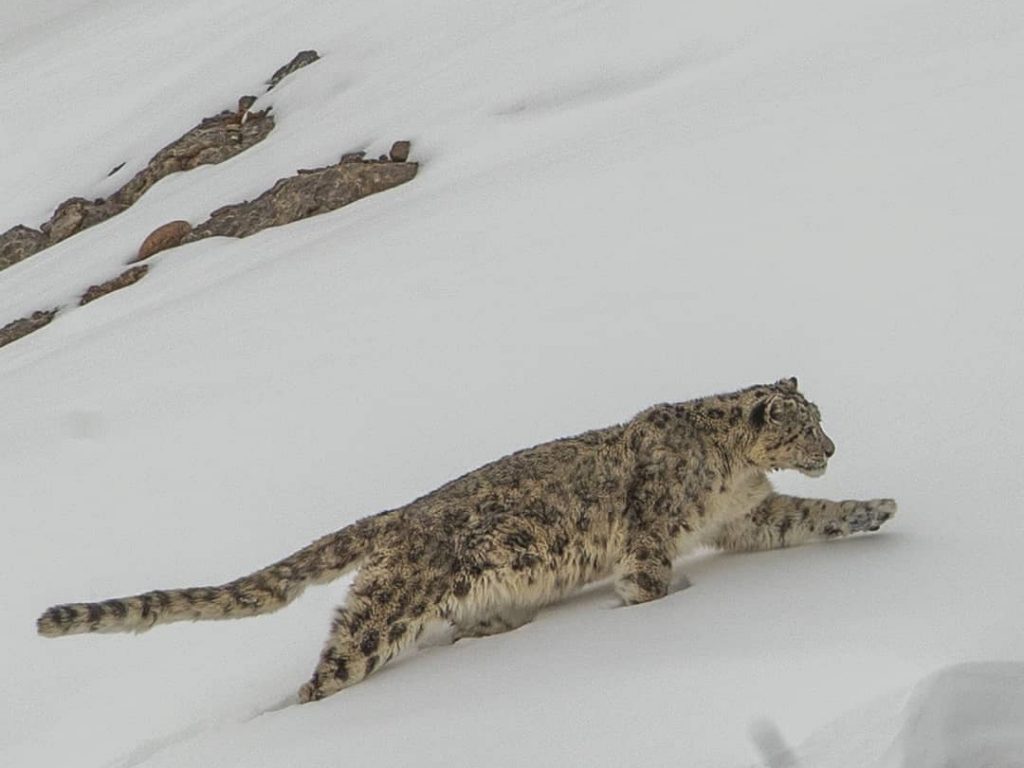 Located south of the Lahaul and Spiti district and encompassed within the so-called Cold Desert Biosphere Reserve , the Pin Valley is the best reference when it comes to discovering the fauna and flora of the Spiti Valley . Influenced by Tibetan Buddhism in the form of small monasteries that dot the landscape, the park is famous for the presence of one of the most famous endangered species in northern India: the snow leopard whose sighting becomes the most close to an icy mirage.

Unleash the explorer in you in the Spiti Valley during your trip to India .