The Mahābhārata is the oldest epic in the world, the longest epic poem in history, even more than the Bible or the complete works of Shakespeare.
Its extension, its depth, its chaotic structure, its multiple readings and its innumerable nuances make it practically impossible to tell in a few words, as we propose to do now …

Its name comes from Sanskrit : ‘maha’ (great) and ‘bhārata’ (humanity). It is usually translated by ‘ the great history of the people of India ‘ and, by extension, of all humanity.

Argument.
Very briefly, tells the story of rivalry between two groups of cousins. The 5 sons of King Panduor ‘ pandavas ‘ and the 100 sons of Pandu’s brother, the ‘ kauravas ‘.
According to historians, it is based on real events that occurred around the year 3,000 a. C (although others place it around the 6th century BC).

With that thread, many parallel stories are narrated , in fact other great sacred poems for Hinduism like the Bhagavad-gita or the Ramayana are part of it.
They are stories of war and struggle between good and evil, of confrontation for the earth, of love, betrayal and revenge, of wise men, gods and demons. Some stories of a beautiful and amazing fantasy, how only Indian creativity can conceive. From each history, as from the mythology of each town, teachings for life that have been transmitted from generation to generation. 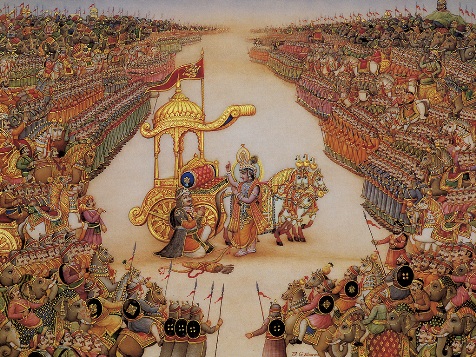 Illustration of the conversation between Arjuna and Krishna before the battle, which gives rise to the ‘Bhagavad Gita’.

Compilation of history.
It was around 400 BC when the original poem began to be shaped, grouping different stories, legends and genealogies of the oral tradition. Up to our hands today comes divided into 18 books (called ‘parvan’), although there are different versions according to the manuscripts used.
It does not have a single known author, but it was molded with the passage of time. However, Krishna Dvaipayana Vyasa is considered responsible for the meritorious work of compiling and organizing such a complex history.

Mahābhārata himself tells how the god Ganesh (the elephant-headed god) agreed to write the manuscript under the dictation of Vyasa, on the condition that he do so often, without a pause in his recitation.
This is the popular explanation of why the image of Ganesh in the iconography has broken the left tusk: at a certain moment the pen failed him, and as he could not stop his writing, the tip of the tusk was ripped off to be able to continue writing, using his blood as ink.

There would be a lot to talk about and tell about this story. Surely there will be an opportunity to continue deepening in future articles.

Read More
The puppets in India

Diving in the Indian Ocean: a sea of ​​options

Read More
Diving in the Indian Ocean: a sea of ​​options
Submit a Comment